Raja received the PhD degree from Madurai Kamaraj University in 2016 under the supervision of Prof. K. Ramachandran. He got prestigious BASE awards from Indo-US forum (IUSSTF) at 2014 and SERB – National postdoctoral fellowship from Department of Science & Technology (DST), India at 2016, possesses a strong background of nanomaterials based solar cell applications. He had interested in wide range of interdisciplinary research, especially, nanostructures, spintronic and photovoltaics device fabrications with different type of materials. Also, he got a postdoctoral fellowship from Korea University (2019) and NIMS (2020). In July 2021 he joined as a MSCA PF researcher in Prof. Emilio Palomar’s group. Apart from research, he interested playing games, photography and walking. 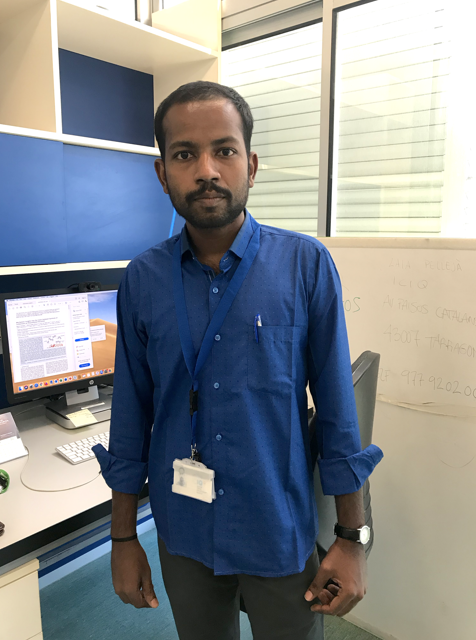 To extend the application of perovskite solar cells, hybrid organic-inorganic perovskites (HOIPs) are emerging as functional materials for novel optoelectronic and quantum electronic devices. In this material, strong intrinsic spin-orbit coupling (SOC), stemming from the heavy metal atoms in the inorganic framework (i.e., Pb or Sn), plays a decisive role in significantly lowering the optical band gap down to near the infrared region and preserving optical absorption from perturbations by local distortions of the lattice. These effects have been harnessed to produce high performance solar cells. The high power conversion efficiency observed for these materials may be related to the degree of SOC strength present in their crystal structure. It has been hypothesized that the strong SOC in the absence of inversion symmetry in HOIPs gives rise to Rashba-type effects, where spin-dependent properties can be manipulated by electric or magnetic fields. The field of spintronics has led both to the highest level of scientific discoveries and to highly important industrial applications in recent years, such as memory devices, hard disk read heads, etc. Here, the controlled propagation and manipulation of spin degree of freedom may in the future allow promising applications in memory device and metrology. The main goals of this SpinPVK project are to observe the Rashba effect in Halide Organic-inorganic Perovskites (HOIP) spin-photovoltaic devices by magnetic current measurement under light illuminations. Also, to demonstrate the spin-polarized carrier injection from ferromagnet electrode into HOIP film, by using a circularly polarized electroluminescence emission in a spin light emitting diode (spin-LED) device. In addition, our aim to establish the electrical spin injection into HOIP using spin valve devices for giant magneto-resistance (GMR) responses. This project addresses fundamental research and enabling metrology for studying photon induced spintronics behavior in HOIPs spin-based devices.