Jacob obtained his Masters Degree in Chemistry with Industrial Experience in 2014 at the University of Bristol, UK. His undergraduate thesis project was carried out under the excellent supervision of Dr. Daniele Leonori and encouraged by this experience, joined Dr. Leonori as he began his independent career at the University of Manchester. His studies targeted the generation of nitrogen centred radicals under mild, metal free conditions promoted by visible light. In 2018, after successfully defending his thesis, he started a postdoctorate position in the group of Prof. Ruben Martin at ICIQ, Tarragona. Following the groups’ main research line, he has been investigating novel synthetic methodology possibilities in CO2 valorisation. Outside the lab, he can most often be found in the beautiful mountains surrounding Tarragona, climbing, running or hiking. He feels very lucky for the opportunity to carry out his research at such a high level institute and that just happens to be situated in such a fantastic location. 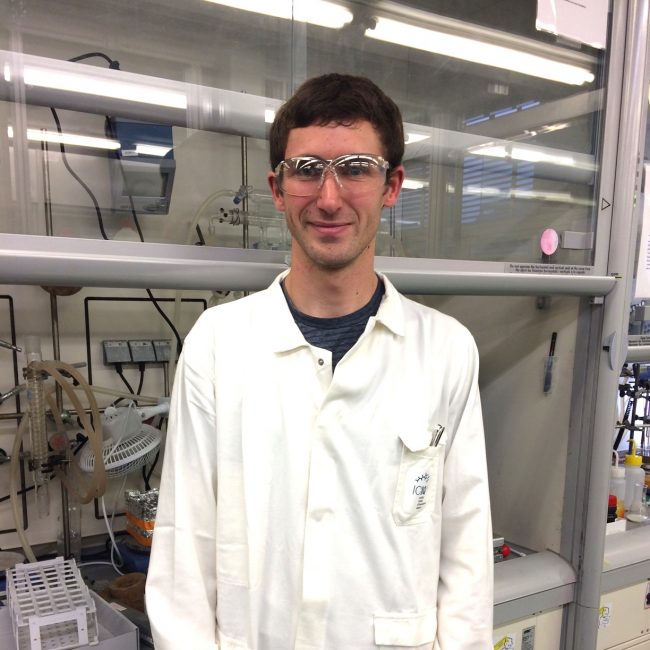 The ability to introduce functionality into molecules in a regio- and chemoselective selective manner is of primary importance
in the construction of high value molecular compounds but still remains a major challenge for synthetic chemists. The
utilization of functionalities present in readily available and inexpensive starting materials to direct the introduction of further
complexity is an attractive strategy which has become increasingly popular. Despite recent advances, the remotefunctionalization
of aliphatic alcohols still remains largely underdeveloped. Considering their prevalence in natural products,
compounds displaying important biological activities and chemical feedstocks, efforts to address this problem are deemed
necessary. ALCO2-FUNC will make use of an easily installed α bromo-silyl tether to direct functionalization at neighbouring
sites. The tether will partake in single electron transfer with a suitable nickel catalyst, initiating a directed radical rebound
cascade. The merger of (reductive) nickel catalysis with photoredox catalysis will exploit advantages of both disciplines,
enabling the development of a divergent strategy by careful control of key catalytic steps. Furthermore, carbon dioxide will
be utilized as a C1 synthon to provide a valuable carboxylation strategy. To such end, simple alcohols will be converted to
their β-carboxylated counterparts (via regioselective 1,5 hydrogen atom transfer) or remotely-carboxylated (following a nickel
chain-walking sequence). Taken together, the synergy between photoredox and nickel catalysis will be employed in ALCO2-
FUNC to develop novel synthetic strategies to access high value compounds from simple precursors. The proposed
methodology is expected to operate under mild conditions (room temperature, low-energy irradiation) increasing functional
group compatibility and setting the basis for the implementation in the late-stage functionalization of advanced
pharmaceuticals.

The decision to move to Tarragona came right at the end of my PhD studies, a busy time to be applying for postdoctorate positions and writing grant applications! My better

Starting the MSCA fellowship in quarantine – a blessing in disguise?

After the elation of finding out that I had been successful in obtaining a MSCA-IF and completing all the necessary paperwork to start as soon as possible, things quickly turned

Prof. Martín has been awarded the “2019 Organic Letters Outstanding Publication of the Year Award” for his article “Ni-catalyzed Reductive Deaminative Arylation at sp3 Carbon Centers”! The Award from the